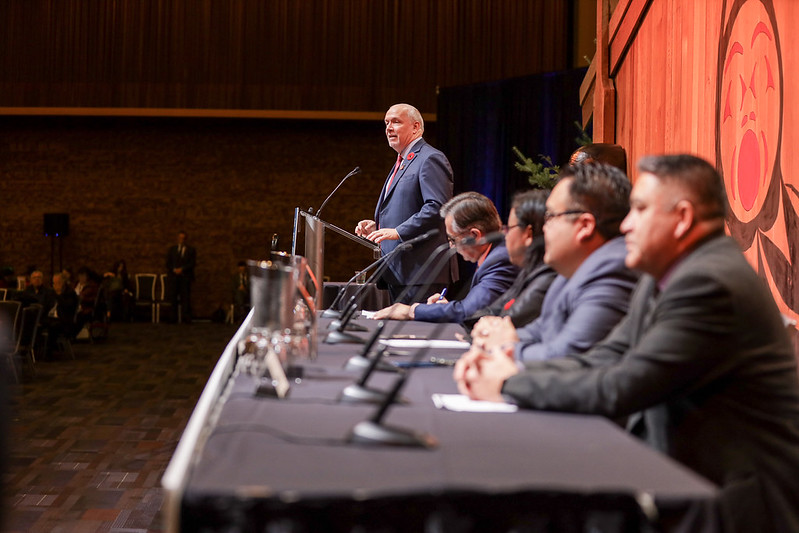 British Columbia’s cabinet ministers and First Nations’ leadership kicked off the annual BC Cabinet and First Nations Leaders’ Gathering on the heels of historic progress that significantly advances reconciliation in BC. Learn more: https://news.gov.bc.ca/20942

In just one year, the Province and the First Nations Leadership Council (FNLC) have worked together to deliver on promises to share provincial gaming revenues and introduce legislation that enshrines the United Nations Declaration on the Rights of Indigenous Peoples (UN Declaration) in provincial law.

Together, these are tangible examples of how the Province and the FNLC are working collaboratively to strengthen government-to-government relationships with First Nations and make a significant difference in the lives of Indigenous peoples in B.C.

Legislation to align B.C. laws with the UN Declaration was introduced in October 2019. The Declaration on the Rights of Indigenous Peoples Act will make British Columbia the first province to implement these internationally recognized human rights into provincial law, creating a framework for reconciliation between the provincial government and Indigenous peoples in B.C.

More than $70 million in new revenue has made it into First Nations communities since a gaming revenue-sharing agreement was signed in August 2019 to support self-government and self-determination for First Nations, as well as strong healthy communities and services that make life better for families. In just two months, almost 170 First Nations have joined the newly formed B.C. First Nations Gaming Revenue Sharing Limited Partnership.

Nearly $200 million in provincial gaming revenue was transferred to the limited partnership in August 2019, representing the first two years of funding. In October 2019, amendments to the Gaming Control Act were passed. These amendments will pave the way for a long-term agreement that will see more than $3 billion shared with First Nations over 25 years.

The gathering takes place this year at the Vancouver Trade and Convention Centre, Nov. 5-6, and provides First Nations leaders in B.C. with opportunities to discuss important community issues through one-on-one meetings with provincial cabinet ministers. More than 900 people are registered to attend, representing almost 200 First Nations. More than 600 one-on-one meetings are scheduled.

The event is co-hosted and organized by the provincial government and First Nations Leadership Council, which is comprised of the BC Assembly of First Nations, First Nations Summit and Union of BC Indian Chiefs.

“When we work in partnership with Indigenous peoples, incredible things can happen. We can create opportunities for people and communities, we can establish a predictable and collaborative path forward for the businesses and industries that grow and sustain our economy, and we can build a better future for our children and their grandchildren.”

“Our commitment to advancing reconciliation together with Indigenous peoples in B.C. is clear, with historic actions already making a difference in the lives of Indigenous peoples. Our government is doing things differently – taking a truly collaborative approach, listening and learning about what matters most to Indigenous peoples – so we can keep moving forward with tangible action together that benefits Indigenous communities and ultimately all people in B.C.”

“Today, leaders from across B.C. come together for this important annual meeting to build and maintain positive relationships. In recent years, we have built a solid groundwork to improve Nation-to-Nation discussions, deliberation and decision-making. We must continue to work together to lift First Nations citizens out of poverty and eliminate the policies and laws that were based in the past of denial, oppression and racism. I commend Premier Horgan, his cabinet, the Green Party and our supporters during these critical times.”

“This year’s First Nations Leadership Gathering (FNLG) has particular significance as it comes on the heels of the historic introduction of Bill 41: Declaration on the Rights of Indigenous Peoples Act, in the legislature of B.C. on Oct. 24, as well as the first transfers of gaming revenue-sharing funds to First Nations communities. These examples, along with FNLG, represent key steps in our broad commitment to jointly design, construct and implement principled, pragmatic and organized approaches to reconciliation in British Columbia.”

“We are incredibly optimistic to be engaged in joint work with the provincial government that is going to make change on the ground. We will continue to defend and implement Indigenous title and rights in the courts and in the streets, but it is critical to be reaching a place where we are also advancing implementation of our title and rights in the legislature as well.”

Declaration on the Rights of Indigenous Peoples Act: declaration.gov.bc.ca

BC Assembly of First Nations: https://www.bcafn.ca/

Union of BC Indian Chiefs: www.ubcic.bc.ca